Shop finally reopened yesterday with Ubuntu as our OS. I like the new look since it feels familiar to our regular customers. Of course Mark and Mars had to do alot of tweaking to make it look that way -- clean desktop, good old dock with new icons for the new apps and the XP background (hehe). The only thing thats really noticable is the missing start menu but since our regular customers are so used with the dock most don't mind its non-existence. Here's a screenshot of the default Ubuntu desktop. 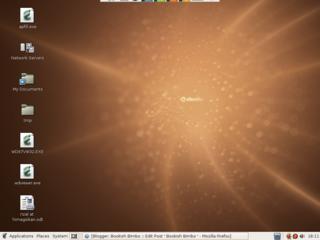 And the new desktop theme. 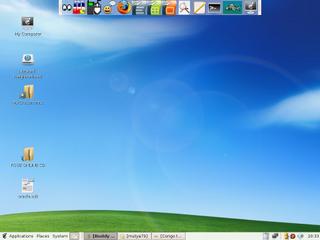 One of the apps I asked Mark to put on the dock was Wanda the Fish. I don't know if any of the customers have dicovered her yet (aside from Armi who doesn't count since I pointed out Wanda to her just now). Wanda is supposed to be a fortune teller who spouts out "words of wisdom". Here are some of my favorites....

As Mark said Sam is finally home. But being the gala that he is we went out again today to see his alternative doctor. No biggie, just a routine checkup. All the same I was really nervous today because I had a sinking feeling that the doctor would get just a bit mad at me because I OVERDOSED MY BABY FOR A FEW DAYS!!! Yes, bad mom alert!!! ( But hell if any of you feel like agreeing with that statement shut up and keep it to yourself my self-esteem doesn't need your opinion right now.) It was only just this morning that my mom realized that the dropper we were using said mg and not mL. Instead of giving him 1.2mL of medicine (equivalent to around 50mg) 3 times a day I gave him 120mg of medicine 3 times a day!!! Imagine how bad I felt. I was so nervous and I felt so bad because I was the one who started using that dropper since it was the dropper that went with the medicine package even if Sam's doctor told me to use the same medicine dropper I used for his vitamins. I was however calm enough to immediately think back and try to remember Sam's reaction to the medicine for the past few days. Since he seemed ok I did not panic. I looked for the medicine box and turned it inside out to read on it. My stomach turned even more sour when I realized just how grossly overdosed my baby was. However the overdose part didn't say anything about adverse effects except that it instructed me to stop medicating the baby immediately. And since it didn't say anything about rushing the baby to the doctor I decided to put it off for a few more hours until the appointed checkup. Well good news to everybody, most of all to me, the doctor said Sam's ok and that it is even common practice to double dose a patient with that medicine when the infection is really bad. Although by the time Sam was taking that medicine his infection was that bad anymore it didn't cause him any trouble. If anything it even helped soften his poopoo since one of the possible side effects was diarrhea, but since Sam is usually slightly constipated it just helped ease his bowel movement. And the other "side effect" -- Sam's lungs are totally clear. ^_^

Posted by Hannah Grace at 9:45 PM
Email ThisBlogThis!Share to TwitterShare to FacebookShare to Pinterest